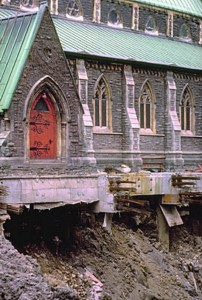 The Catholic church is suffering because her foundations are being purposely undermined by secularist and imprudently interfered with by theistic evolutionists.

Many Catholic countries around the world are at risk from infidels. Our Catholicism is far from secure, as moral depravity sweeps across once strong Christian lands. Abortion and Euthanasia are becoming evermore prevalent and accepted as ‘normal’ by secular governments. There is a rise of gay activism of the similitude akin to a pot of water suddenly coming to the boil. No good counter arguments, nor solid rational appears to be able to quell anti Christian sentiments. We have fallen into a dark age of militant secularism! So where do Catholics need to pour resources to redress this breach.

Many Catholics in Ireland for example, are simply starved off their faith. The land of Saints and Scholars is in distress, and it came under our own watch. The poor Catechises of the 70’s, the distressing abuse revelations of the 90’s and the lack of leadership that followed has Ireland’s Catholicism in a poor state today. That is not to say it is all over. There are helpful lessons to be learned, and if we look through our authentic history books regarding Catholicism (Our Martyrs), we can see a common thread. There has always been a Catholic purging policy in Ireland since Cromwell’s time, and this policy seems very alive today.

We need as Catholics to recognise, that imbueing a sense of the supernatural is imperative to our faith. Genesis is not some myth with a meaning, as contemporary Catholics beleive today. Supernatural belief and rational belief were the norm in Ireland in the 19th century. We had faith and reason, and believed that God created from a traditional interpretation of Genesis. Theistic evolution had not yet corroded theology, and this remained the case, right into the early 20th century. It is more reasonable to believe that God created ex nihilo, than to believe in Darwinism. This is foundational to our Catholic faith. If we get this right, the fight against secularism and infidelism is easier. This friends, is where Catholics need to pour resources.