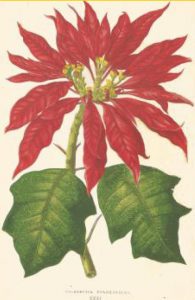 A treasure from heaven this Christmas

The association of the plant with Christmas arose in 16th-century Mexico. According to legend, a little girl, Lucinda, too poor to buy a gift to celebrate Jesus’s birthday, was inspired by an angel to gather weeds from the roadside, which she placed in front of the altar. Crimson blossoms sprouted from them (centuries later named poinsettias). Franciscan friars in Mexico from the 17th century included the plants in their Christmas celebrations. Symbolically, the star-shaped leaf pattern represents the Star of Bethlehem, and the red colour the blood shed by Christ.