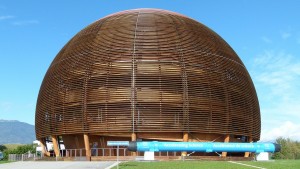 The Cern Project in Switzerland is a potential disaster waiting to happen, and a waste of time and money.

A friend recently quizzed were we up to speed on the Cern project in Switzerland. To be honest, we only knew what we heard from main stream media. Our view has been that the Cern project is a waste of time and money. We also have reasons to hold serious concern over the implications of using machinery to collide particles, and thus split the atom. The ideal is to recreate the big bang cosmology, and help scientists to understand the origins of the universe. Members of the Daylight Origins Society are not impressed with such ambitious ideology.

It should not take long to realise, that recreating a big bang is a very dangerous idea. Splitting the atom, costed lives in Hiroshima. That city was small scale stuff in comparison to the 17 mile long tunnel under Switzerland with its CERN collider, where the big bang theory is being researched. It should not take a rocket scientist to conclude that unwittingly blowing Switzerland to smithereens is within the realm of possibility. We also must presume, the serious environmental fall out from such a melt down disaster. The Chernobyl nuclear accident would not even come close to describing how bad an unforeseen collider disaster in Switzerland could get.

Concern of a top scientist

Steven Hawkings has raised his concern over the CERN collider project. We suspect Hawkings is extremely concerned about colliding particles into each other with the view to splitting the atom at the sub atomic level. The Mail Online wrote “Finding the ‘God’ particle could destroy the universe, warns Stephen Hawking”. Need we say more??? Perhaps you could research for yourself, but don’t rely solely on what we say, or the media says. Use your one God given logic, and don’t be surprised if you see the devil in the details. This CERN project really is something destructive, and the devil comes to steal and destroy!