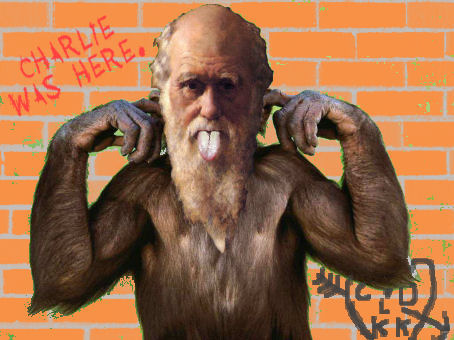 Was Darwin acting the monkey with his theory of evolution?

Little did we ever imagine, that by questioning the validity of Darwin’s theory of evolution as a scientific fact, what path this would lead us to. We did have some accurate guesses as to how people would react to our endeavors. That being mainly one of ridicule, and rejection. But the Catholic friends whom we won over, replenished those who rejected us for quizzing the authenticity of the theory of evolution. We need not labour the various conundrums that seriously undermine Darwinist’s pet theory. This work has been done for us courtesy of our friends at the Kolbe Center for the Study of Special Creation.

The choicests of good fruits

One you’ve recognised Darwin theory as scientific fraud, your focus of attention turns towards a healthy skepticism of all things main stream. You no longer look up to men professing greater knowledge due to some PHD they possess. Instead, you question their ability, as your scientific inquiry skills give you self confidence. You see through the smokescreen of mystery, that often prevents otherwise intelligent men from recognizing a fraud. The simple task of discerning if scientists are actually qualified in a particular field becomes your 1st line of inquiry. After that, you judge whether there is too much speculation being considered.

The best fruit of scientific inquiry

After satisfying ourselves with scientific literature that contradict Darwin’s theory of evolution, our minds turned to Catholic doctrines. Further satisfied that the Church Fathers, Doctors, Saints, Councils and Popes down the centuries give credence to Special Creation, our minds opened up to authentic history. Authentic science compliments authentic history, and both fields of knowledge help us gain greater insights into who we are. If you are Irish, or British, you will be happy to know that authentic history books exists for you. What good fruits of scientific inquiry, and what a joy!